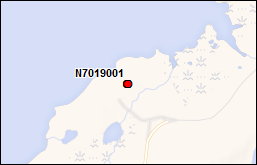 (Dec 23, 2014 - JM; no change) The site was transferred from 9 Wing to legacy. They retain the report on file although information has also been transferred to the legacy group. R/RM required. Waiting for Provincial direction. As per Dec 92 Report 387 drums o n site of which 89 full, 130 partially full and 168 empty, the site was in poor condition and remediation recommended. DND Tanks (T -35 and T-36) installed in 1991 - sold through CADC to Air Labrador in 1995. From the 2004 HR/LFI, petroleum impacts were found at t he former DND drum storage area - Old Chopper Pad Site. The other site where the tanks were installed - Cartwright Airport site was not investigated and requires some further historical review. Further assessment of impacts is required at the Old Chopper Site to d etermine extent of contamination and if off site migration is occurring. The impacts however could not be attributed to one source, it was used by DND and commercial helicopter companies for 20 plus years. The site is still used by locals for disposal of waste oil . Many drums on site in poor condition. DND to initate discussions with NL Works Services and Transportation and NL Government S ervices and Lands regarding responsibility. Letter 1262-1 dated 5 Jan 05 to Prov. WS&T.