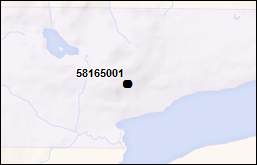 Evidence of fuel spills were observed at the UST near the health centre in 2000. Surface sampling suggested contaminated soil to be less than 15 cubic metres. 3 cubic metres of suspected soil was removed in 2001 and additional testing undertaken. All soil sampled indicated no contamination remains. Site remediated.