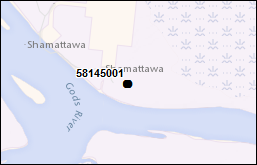 Petroleum hydrocarbon contamination has resulted from a leak of approximately 5,650 litres of diesel from the 6th to the 9th of February in 2005. The fuel release occurred between the nursing station building and the facility’s three 1,135 litre aboveground storage tanks due to a ruptured supply line running from the tanks to the nursing station. A volume of approximately 310 cubic metres of contaminated soil is present at the site over a total estimated area of 168 square metres. Approximately 60 square metres of impacts exists underneath the nursing station building. A remediation system was installed in 2008 and will continue to the end of 2009.