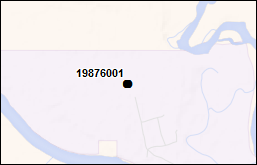 In 1998, 3 cubic metres of heavy staining was reported at the site of the former aboveground storage tanks located behind the existing nursing station. An environmental site assessment conducted in October 2006 indicates petroleum hydrocarbon soil contamination in the amount of 29,900 milligrams per kilogram beginning at a soil depth of 0.6 metres. Contamination extends to 6 metres underground (to the water table). Approximately 10 cubic metres of soil was removed from the impacted area and moved to a temporary biocell located in the community landfill for treatment. A risk assessment was conducted to evaluate potential risks to receptors at the Site based on current conditions. Risks were considered acceptable for receptors in the current and construction scenarios. Site is remediated.