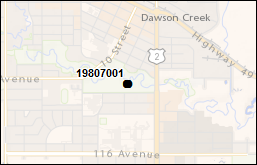 Former abandoned underground storage tanks have been removed, and excavation and disposal of all contaminated soils has been completed. No further action required.

One 5,500L underground fuel oil storage tank, and one 50L gasoline day tank, were removed from the site, along with 45 tonnes of hydrocarbon impacted soil.