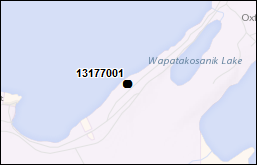 Approximately 720 cubic metres of hydrocarbon soil contamination was identified in 2001 at four ASTs located west of the Nursing Station and one former AST (removed in 1978) which was located northwest of the Nursing Station. In February 2003, the ASTs were removed. In the spring of 2003, 2000 cubic metres of contaminated soil was excavated and removed. Site remediated.