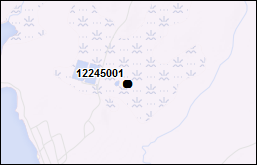 One large plume was situated beneath and on the west side of the former nursing station extending 45 metres west towards the lake. This plume extended to the groundwater table at two monitoring wells. One small plume of contaminated soil was situated at the location of the bulk storage tanks on the east side of the reserve. In 2004, 9,628.5 cubic metres of impacted solid was excavated and placed in bioremediation cell for treatment. Treatment of impacted soils was completed in 2008. Site remediated.