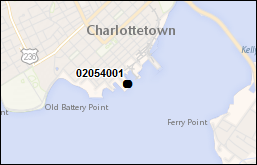 Risk Management Plan implemented in 2004/05 for propeller wash prevention at wharf. An update to the 2004 RMP / RAP document was completed in 2009 / 2010 to consider any new guidelines / criteria. A NCSCS evaluation was completed for this site in 2009 / 2010. The site is classifed as a Class 2 with a final score of 57.8 indicating a medium priority for action. In addition, the Draft FCSAP Aquatic Sites Classification System (2009) was reviewed in context to the subject site with it being classified as a Class INS - Insufficient Information.

For propeller wash prevention at wharf. Estimate of extent of contamination is based on remedial dredge depth of 3.0 m.