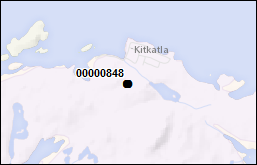 In 2004, fuel staining of soil was observed at two aboveground storage tanks at the nurse-in-charge residence and one aboveground storage tank at the nearby generator shed. An environmental site assessment conducted in February 2007 estimated that a total of 2 cubic metres of contaminated soil is present at these locations. In 2007/08, the remediation was completed at the site. A total of 14.4 cubic metres of impacted soil was removed and stored in a temporary biocell at the community landfill. Site is remediated.