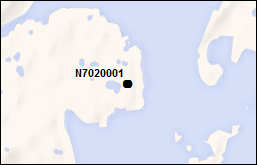 (Dec 23, 2014 - JM; no change) Discuss findings with land owner (NL Government) and determine DND liability/responsibility. The site was transferred from 9 Wing to legacy. They retain the report on file although information has also been transferred to the le gacy group. As per Dec 92 report 446 drums on site of which 417 were empty, 11 full and 18 partially full - drums from different users in the one pile - 90% belonged to DND. Some small localized spills evident. DND Tank (T-40) installed in 1991 sold via CADC t o Air Labrador in 1995. From the 2004 HR/LFI petroleum impacts were found at the former DND drum storage area, which may be attribu ted to SAR fuel cache. Further assessment of impacts required, however, its unclear as to responsibility of contamination. Other pot ential sources identified include Canadian Helicopters spill, and improper refuelling by various users. DND to initate discussions with NL Works Services and Transportation regarding responsibility. Letter 1262-1 dated 5 Jan 05 to Prov. WS&T.