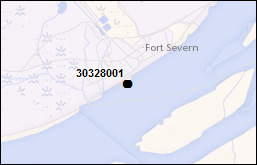 An Environmental Site Assessment in 1998 determined 160 cubic metres of petroleum hydrocarbon contaminated soil in two areas: 1) north of the former school fuel storage facility, and 2) east of the nursing station (behind the Band Administration office in the vicinity of the former fuel storage area). The contaminated soil was excavated and treated in a landfarm. Site remediated.