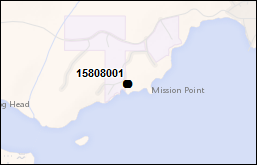 Three areas of petroleum hydrocarbon impacted soil were located at the health clinic, the garage, and at the back-end of the residences. Contamination at the health clinic was remediated in 1998 when the facility's tanks were converted to propane, and the old underground fuel tank removed. Contamination at the garage and the residence was remediated in 2000 following the removal of aboveground fuel tanks, which were also replaced with propane tanks. Site remediated.