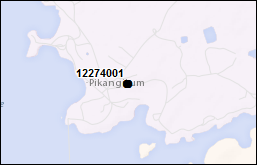 Four areas of petroleum hydrocarbon impact were identified during an environmental site assessment following a fuel spill in May 1997. Impacted soil existed at the three duplexes and the trailer units. Impacted soil was excavated and sent to a landfarm for treatment. A flood at the water treatment plant in October 2000 led to a diesel fuel spill at the day fuel storage tanks. The spill was localized in the basement of the plant and cleaned up. The site was remediated in 2001.