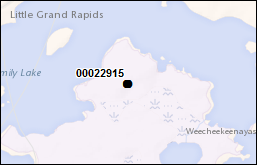 In September 2006, during the decommissioning of the former fuel tank farm located northwest of the nursing station, fuel spills were suspected due to a hole in the tank farm protective liner. An environmental site assessment during the tank decommissioning included the collection of subsurface soil samples for analysis of petroleum hydrocarbons. The results indicated minimal contamination, and a 3 tonne volume of discolored soil was excavated and sent to a local landfill. Site remediated.