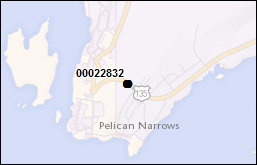 An environmental site assessment completed in 2003 identified 35 cubic metres of petroleum hydrocarbon impacted soil at the location of a former aboveground storage tank that was connected to the former nursing station at Pelican Narrows. The storage tank and former nursing station were removed due to damage created by a fire in the fall of 2000. In 2004, the impacted soil was excavated and transported to an off-site landfarm for treatment. Site remediated.