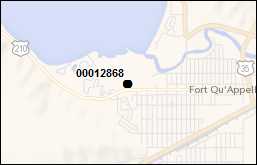 Site was transferred in FCSI to Indigenous Services Canada from Health Canada First Nations and Inuit Health Branch in 2019. Status at the time of transfer was Closed.