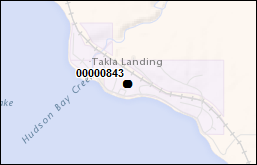 In 2004, significant soil contamination was observed inside the generator building and beneath an adjacent fuel barrel dock. An environmental site assessment conducted in February 2007 confirmed soil contamination in the vicinity of the generator building. Fuel drums at both locations were determined to be in poor condition and were removed in June 2007. In 2007/08, the remediation was completed at the site. Approximately 5 cubic metres of contaminated soil was removed from the site and moved to a temporary biocell in the community landfill. Site is remediated.